In July 2020 we tested ICS 25 and ICS 50 systems according to the new EN 1366-13:2019 (Fire resistance tests for service installations – Chimneys) at Eurofins Expert Services in Espoo, Finland. We passed 120 minutes fire resistance with closed specimens (type A) in both horizontal and vertical installation.

Schiedel is the first manufacturer that tested its products according to this new standard. 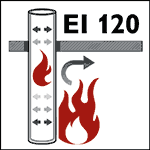 Fire resistance testing takes place in a large furnace, where test specimens are installed in exactly same way they would be installed in a building. It is necessary to precisely define and perform all the details of attaching the samples to the supporting structure, including the type wall bands and fastening material.

The most important detail is the passage of the chimney through the wall or the ceiling, where it is necessary to define the insulating expansion layer, fire protection plates and their fixing to the structure including all sealing material. The size and length of the tested samples, the position of the openings and their distance from the walls are precisely defined by the standard.

The testing procedure is such that the specimens in the furnace are exposed to a simulated fire, where the temperature rises according to the standard fire curve. During testing, the temperature is measured with a large number of thermocouples at defined locations on the specimens.