A remarkable installation of a Magnum Firechest with a Pumice Chimney System took place Down Under in the Australian Bush. 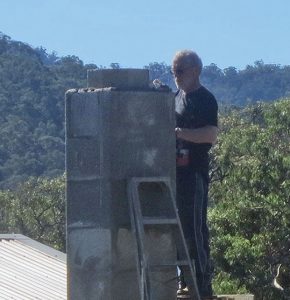 Keith Mitchell, from the Volcanic Chimney Company in Wales, is a UK based expert installer who struck up a friendship with Aggy Marsham, who after spells working with Keith in Wales, eventually settled in Australia with his partner and purchased a hundred acre “block” on the edge of the Wadbilliga National Park, close to the south coast of New South Wales.

Keith’s own son settled in Australia, so the connection with his friend, Aggy continued with regular visits.

Keith starts the story about the installation: “The block didn’t have any connections with the outside world and, barring a telephone line, still doesn’t. A couple of caravans, some corrugated iron and lots of timber from the property were used to create an initial cosy and very funky shack, which still stands and I have the pleasure of staying in when I visit. Dams were constructed to create a water supply and solar panels with a backup generator for electricity.”

Then work was started on a more permanent building, initially a garage and large workshop which is slowly metamorphosing into a fine house. During Keith’s visit in 2014 he looked at Aggy’s idea of swapping the patio doors for a fireplace! Measurements were taken for future reference.

In 2013 Aggy’s father sadly died 2 months short of his 100th birthday. After the estate was sorted out, Aggy decided to use some of the money to effect his desire for a large open fire in his “new” house. Firewood was not an issue, in fact it would be useful to consume some of the excess that was unfit for stove use. The climate in New South Wales is generally benign, though it can get cold in the evening and mornings during the winter months.

Thus the importation of a Magnum Firechest and Isokern Pumice Chimney System was organised by Schiedel Isokern.

Fortunately, as Keith points out, Tony Oliver at Isokern remembered that plastic pallets were required because of Australia’s strict bio security. All went fairly smoothly and on Keith’s next visit he had a “busman’s holiday” constructing the fireplace and chimney. Some imaginative “bush scaffold” was required – the plastic pallets came in very useful for this! Surplus lip glue and firebrick cement were utilised to adhere the locally sourced granite slips to create a more appropriate look.

They also discovered that they could still sprint pretty quickly when prising up one suitable looking slab revealed a nest of deadly baby brown snakes!

“My most recent visit in October last year started with a cool evening – a good excuse for a fire! It lights and draws with no problem and burns beautifully. I was surprised with how well it threw the heat across quite a big room. Schiedel Isokern pumice is the ideal material for this because of it’s incredible insulation. Aggy is delighted with the result.”

Aggy recently sent Keith a message after the fireplace was commissioned: “Just wanted to say I’ve lit the fire a couple of times; bloody awesome! No smoke in the room and can chuck any old wood on – don’t even need to chainsaw the wood if I don’t want to! Really pumps out the heat well into the room. Fantastic!”

For more information on Isokern products, including the Magnum Firechest, please contact us on 01202 861650 or drop us a message at info@schiedel.co.uk.