Anfield is one of the historic stadiums in the world, with a team to match, having been crowned League Champions for the first time since 1990.

Anfield is one of the historic stadiums in the world. It evokes such passions and dreams from people watching from the old stands, to renowned players dominating on the turf. It has seen so many memorable games, from the swaying Kop of the 60’s and then astonishing European Cup triumphs in the 70’s and 80’s. The stadium, being the old fashioned compact building, roared into life on match days, with a claustrophobic atmosphere intimidating many teams, including a supposedly unstoppable Barcelona team in the Semi Finals for the 2019 Champions’ League Semi Finals.

With the Taylor Report, the stadium was modernised, but still had the feel of the successful heydays, but the capacity was reduced. In the past, there have been a number of options to redevelop, or relocate, even including a stadium share with Everton. The team itself struggled to regain past glories, having been overtaken my mega-billions teams such as Chelsea and Manchester City. A brief upsurge occurred in the mid 90’s when they finally regained the European Cup again. Since then, it’s been false starts, as well as arguments over the stadium and how to take it into the modern era.

Luckily, the choice was made to redevelop. So many new and astonishing stadiums have been built throughout Great Britain, which have taken their host teams on to higher things, but with Anfield, the essence of the old stadium remains. The stadium is taking shape as part of a greater regeneration of the area. This means that the eventual capacity could be over 60,000, making it one of the bigger stadiums in the Premier League. However, the feel of the stadium is still there and clubs are learning that atmosphere is the integral part of any redevelopment, along with aesthetics.

With any such major project, it needs to rely on established and reputable commercial teams to carry out the work in today’s stringent health and safety aspects. One such important manufacturer, Dieselec, with their number of years of experience, were chosen by Liverpool FC to supply and install a back up power supply to the new construction. A 700kVA generator was used and set with acoustic enclosure.

Mark Taylor, Dieselec Thistle Generators Project Manager, said: “It is great to be involved in the major redevelopment of such an iconic landmark. The installation was challenging, but our experience in major infrastructure projects ensured the job was delivered to our high standards with success.” 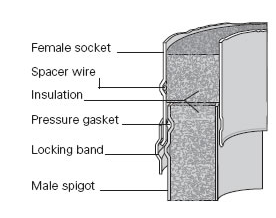 Schiedel supplied the ICS 5000 flue to the Dieselec generator. ICS 5000, which is a twin wall, stainless steel flue, insulated with a 25mm thick high-density superwool blanket. ICS 5000 is designed to handle pressures up to 5000pa and has been used by Schiedel in hundreds of landmark projects throughout the UK and Europe, such as the Anfield project.

It was a remarkable project in that, like football players on a pitch against a packed defence, the pipe had to weave in and out a number of angles to reach the exhaust point.

It again shows that Schiedel tend to be the choice of all the major contractors and boiler manufacturers in important commercial projects. The reputation and the reliability, as well as durability, of all their products means that they are the only choice for critical projects.

For more details on our products and services, please browse the website, take a look at our social channels, or contact us via email or call 0191 4161150.